If you have Irish ancestors who emigrated to another country between 1845 and 1851, there is every possibility that this was directly due to what has now become known as the Irish Potato Famine, or the Great Famine.

The direct cause of the Famine was potato blight, which ravaged  the staple crop of many Irish. It has been estimated that during the Famine approximately 1 million people died and a further million were forced to emigrate, reducing the population of the country by up to one-quarter.

This week – and perhaps appropriately for St Patrick’s Day – I discovered, sheerly by chance, that one of the many peoples sending aid to the Irish during this period (when the English government, I am ashamed to say, did nothing of any practical use) were the Indians of the Choctaw nation. Sixteen years previously these peoples had faced starvation themselves on the 500 mile trek to Oklahoma known as ‘the Trail of Tears’; they had few resources – and yet they raised $710 dollars for the victims of the Irish famine.

This donation, from one of the world’s poorest people to a starving nation, has not been forgotten. In 1990 a delegation of Choctaw officials was invited to participate in an annual walk in County Mayo commemorating a tragic starvation march that occurred during the Famine. In honor of the special guests, the organizers (Action From Ireland) named the march The Trail of Tears. Two years later, two dozen people from Ireland visited America  and retraced the 500-mile Trail of Tears from Oklahoma to Mississippi. That same year the Choctaw tribe made Ireland’s President Mary Robinson an honorary chief.

A memorial plaque on Dublin’s Mansion House  commemorating  the Choctaw contribution reads: “Their humanity calls us to remember the millions of human beings throughout our world today who die of hunger and hunger-related illness in a world of plenty.”

A picture paints a thousand words. As the map below shows, there were only three Irish counties which experienced a rise in population in the years 1841 – 1851: two of these were the major cities of Dublin and Belfast. 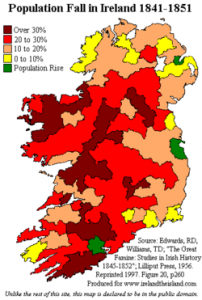 1 Response to The Irish Potato Famine