A couple of weekends ago I was contemplating these images, which are part of a collection belonging to a friend of mine. 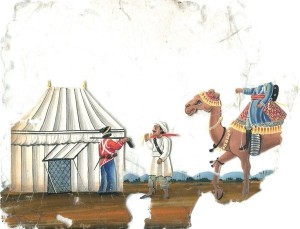 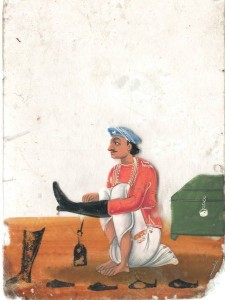 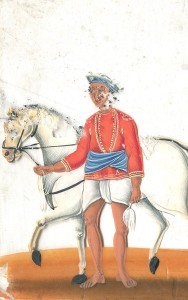 All my friend knew about these were that they were known to have been sent to an ancestor of hers in England in 1900, that they had been sent from someone else in  England and that clearly they depicted life in India before that date.

She also told me that the background to these images was a transparent material; possibly, she thought, they were painted on  celluloid.

The only information I could add was that the medium in which they were painted was goache (watercolour paint would be too translucent) and that celluloid was not invented until 1868, giving us a rough period for dating of 1868 – 1900.

So far, so interesting:  but were there more clues in the pictures? I sent copies of them to my friend Dan, a member of the Victorian Military Society, who really astonished us with the amount of information that the images revealed. He told us:

The tent in the main picture, is clearly a European one.  The tents, pavilions would be a better word, used by the natives (by which I mean those born in India – some people now find this term derogatory, but I don’t intend it to be so) were much more elaborate affairs.

The groom and the chap cleaning the boots (which are clearly a European officer’s boots), are in livery rather than military uniform.  They could be regimental servants or the officer’s own.  There’s no way of really saying for sure.

As to the date, the figure of the soldier by the tent is the best guide.  Up until 1825 Native soldiers (sepoys) in the East India Company’s armies wore shorts (officially called “drawers”) – usually white with a blue dog-tooth pattern around the bottom of the legs.

In 1825 long trousers (white in hot weather and dark blue in cold) were introduced.  So, the picture is post 1825 and set in the cold weather months.

However, the cap that the soldier is wearing (generally called a “bell-topped shako”) was not introduced to sepoy regiments until the 1830s and lasted up until the Indian Mutiny of 1857.

I think I’m right in saying it was only introduced in to the Bengal Army (which covered Northern India plus what is now Pakistan and Bangladesh).  The Madras Army (Southern India and Burma) and the Bombay Army (Western India, and Aden) never adopted it.

There’s no way of identifying which regiment he belongs to.  The picture just doesn’t have that level of detail.

So, what we have here are pictures, as you say, probably illustrating an account of camp life in Northern India in the 1830s/40s drawn by a native artist  (sometimes called “Company Artists” as they worked principally for the European, rather than the native, market).

So I was wrong in my original ‘earliest date’.  In my own defence, I will say that I’ve never actually seen the originals.  But, if the paintings are not on celluloid, what is the medium on which they are painted?

The wonders of the internet.  I used as my search term ‘Company Artists’, and within moments discovered that the images were painted on thin sheets of mica, a naturally-occuring form of silicate, which can easily spilt into flat sheets (as, for example, slate can).

So, there we have it.  We know a lot more about these images – even the season of the year in which one of them is set.

And that’s what I mean by ‘Detective Work’.  Or, as my late mother would have said ‘If you don’t know, then ask.’  The owner of these pictures knew very little about them; I could add a very little, but I knew someone who might well be able to help us; and when I realised that the tentative dating we assigned to them was ‘out’ by some 40 years, I looked to see where and why that first dating was incorrect.

You can see more of these set of paintings at www.sharehistory.org/projects/91-indian-company-paintings

There are more examples of Company Paintings, and further details about this style of art  at www.vam.ac.uk/content/articles/i/indian-company-paintings

You can find the Victorian Military Society at www.victorianmilitarysociety.org.uk/