A few weeks ago, I combined two of my favourite hobbies: walking and local history.

On a fine Sunday, my friend Jane and I, together with Evie the dog, set out along the Staffordshire and Worcestershire Canal to see for ourselves the carving of a ship at Awbridge, which local legend has it was carved by a Napoleonic prisoner of war.

Canal walks are always interesting:  there is always something to be seen.  They were, together with the turnpike roads,  the major transport network until the coming of the railways.

The Staffordshire and Worcestershire canal was engineered by James Brindley, and links the river Severn with the Trent. It was opened in 1771.

Our interest, however, was piqued by the legend.

The bridge at Awbridge has several interesting features.

I was intrigued by the nearness of the lock to the canal arch, and indeed by the cast iron footbridge over the lock, which is still used by those opening the lock: 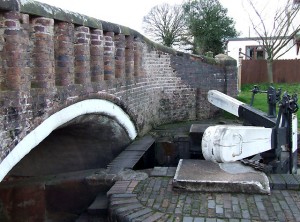 You can see in this photograph another detail which interests me:  the construction of the wall of the bridge.  I’m no expert on canal history, but most bridge walls are a solid structure.  Here, the wall has piers:

(apologies for the tiny image – at this point my camera batteries gave up and this was taken on a mobile phone.  Click on the image to enlarge it.)

The pillars at each end of the bridge have sandstone caps, and on one of these is the ship carving: again, if you click on the image, you can make out the details.

And I’d walked across the bridge numerous times before, and never seen this.