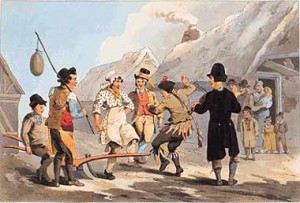 Today, being the first Monday after Twelfth Night, is Plough Monday, the traditional start of the English agricultural year.

Plough Monday was the day on which agricultural workers resumed work after Christmas, and was marked with  celebrations. In some areas,  a plough was hauled from house to house in a procession, collecting money,  accompanied by musicians, an old woman or a boy dressed as an old woman (called the “Bessy”), and a man in the role of the Fool.

Plough Monday celebrations  date back to at least the fifteenth century but fell into abeyance in the nineteenth century.  In many areas they have been revived as part of the twentieth century “Folk Revival”.

There are many other folk traditions and customs that are still celebrated: some of these have survived without a break. 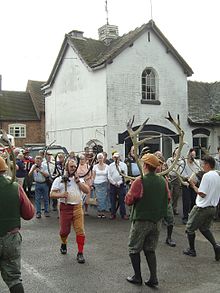 The traditional Horn Dance has been performed in the Staffordshire village of Abbots Bromley on Wakes Monday every year  since at least 1686, but appears to be part of a much older tradition.  The reindeer antlers which the dancers carry, and which are kept within the church of St Nicholas, have been carbon dated to the eleventh century.

If you have ancestors who worked on the land, it is almost certain that they would have seen or taken part in such celebrations.

Some traditions are of more recent date:  the town of Haworth in West Yorkshire marks the start of the Christmas season with “Scrogging the Holly”:  a modern ceremony which involving gathering holly to decorate the town and involves  a procession with the Oakworth Village Morris Men, chimney sweeps, a holly cart, brass bands and other musicians and entertainers, who parade from the Christmas Tree to the church of St Michael and All Angels, where the Holly Queen is crowned on the steps before the gates are opened with a special key to admit the spirit of Christmas and Santa. 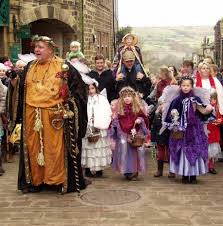 Scrogging The Holly at Haworth

If you’re interested in seeing some of these customs, the excellent site www.calendarcustoms.com/  gives details of many traditions, together with a calendar and map. Some of these customs are  celebrated daily, such as the setting of the watch in Ripon, North Yorkshire, which has been observed at 9pm every night since the year 886 AD – over 1,100 years of continuous tradition. 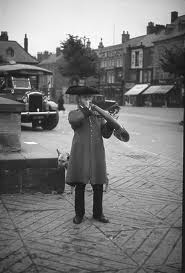 Setting The Watch in Ripon